PROPCON Golf Club had been a member of PGI (Persatuan Golf Indonesia) - Indonesian Golf Association since January, 7 2011, with member registration number # A.0218. By a member of PGI, the handicap card index released by PROPCON will be recognized as the official handicap card, which can be used at all golf courses in the world.

On a crisp and perfect morning, a few men went out and had a game of golf together, came back and tossed around an idea - to form a Property and Construction Golf Club. A meeting was scheduled, and it was voted among them that they go ahead and form the club.

A membership drive was undertaken for which 32 applicants were received – all were accepted. An inaugural meeting was scheduled and a committee formed. The Club was started with a CLUB SECRETARY, a TREASURER, a TOURNAMENT MANAGER, and 2 COMMITTEE MEMBERS.

Membership fees were accepted for each member and the club was finally formed in June 2008.

Through regular organized golfing events the group shall enable the network access to a wider associated community and to new building techniques, engineering services and products whilst agreeing and implementing sustainable ways to assist Indonesia's construction needs.

To be the most effective network for the property & construction industry providing sustainable construction solutions in Indonesia, while enjoying social golfing venues and fellowship.

There are many social aspects and benefits to playing golf. This is perhaps seen best in the business world. Golf is actually considered the "sport of the business world". This is because many, many rounds of golf are played by business partners and associates. Many business decisions are made on the golf course as well.

With a maximum membership limited to 80, members represent a broad cross section of industries, including : manufacturers, contractors, suppliers, consultants and developers, regardless with whom you play golf, PROPCON provides a great arena for business networking, social interaction or merely enjoyment. 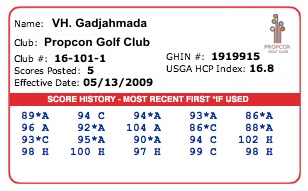 During every of our tournaments, scorecard must be well recorded and submitted to the committee after tournament. All players in this list have been submitting enough scorecards to enable Handicap Software to calculate their handicap index, then the Handicap Card can be printed by yourself.
The feature only able to be viewed and downloaded by PROPCON MEMBER/REGISTERED USER. To acces this feature, please click the Icon on the right. Please login first or register to the website. 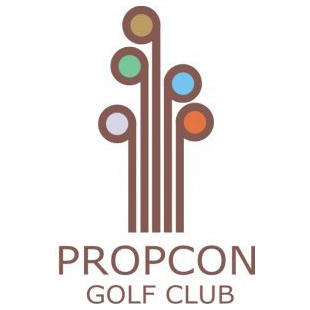